Learning in the future

Holograms, headsets and healthcare: the future is now 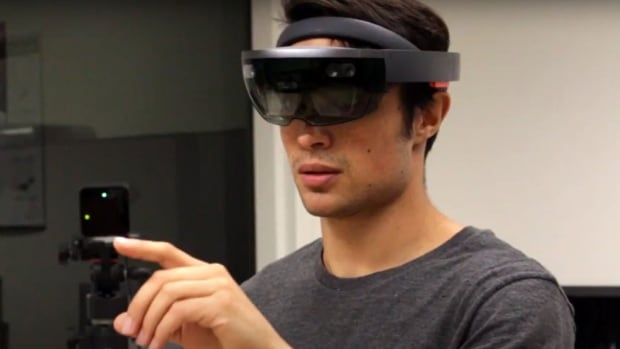 Imagine a future where someone in rural New Brunswick could be treated remotely by a physiotherapist, standing in front of cameras that provide a three-dimensional version of them in real time.

Or being able to practice repairing aircraft engines on a hologram, instead of the real thing.

For Scott Bateman, these scenarios are within the realm of the possible and that is what he is working towards at the University of New Brunswick.

SPECTRAL, the Spatial Computing Training and Research Lab, is where Bateman, professor and lab director, works with companies to teach students and industry professionals about spatial computing and the variations of reality.

Bateman said using mixed reality to do this kind of training allows people to make mistakes and learn from them.

“It will be a…tighter, more diligent focus on their education…immediately putting their experience into more practical, real-world terms than we would be able to do if we were just doing some sort of typical classroom education experience. “

Bateman said a coach might be halfway around the world, but by putting on a pair of glasses, they can see what the student or worker is seeing and give advice using virtual annotations that float in the air.

He said they have also worked with the prosthetic clinic at UNB’s Institute of Biomedical Engineering in Fredericton.

People go to the clinic to get fitted for prosthetic limbs, Bateman said, but when they get home they don’t always have the muscle-training therapy to prepare them for the prosthesis. He said this leads many people to give up their prostheses.

But using augmented reality headsets, he said the patient would be able to look down and have their prosthetic limb appear virtually, and they could train their muscles like they could with a real prosthesis.

Bateman said for a project like this, the technology would ideally be publicly funded or covered by insurance. He said that comparing the cost of an augmented reality headset of around $4,000 to the cost of a prosthetic limb, it’s a “worthwhile investment” to increase grip and use of a full-line prosthesis.

For a project like the Mixed Reality Physiotherapist, Bateman said while it can be done with special 3D cameras, they’re also increasingly able to do the same type of thing using laptop or tablet webcams. .

“For this scenario, there may be equipment at home that people could use to get their consultation with their physical therapist remotely,” he said.

The lab recently announced a partnership with Kognitiv Spark of Fredericton.

He said Kognitiv Spark brings its software to the project, but also its connection with customers.

McSporran said they call their technology “now tech” because things that sound futuristic, like holograms, are actually available in the present.

“It’s those kinds of things that people associate him with – star trek and with the holodeck and so on,” McSporran said. “But the reality is that we are here now. And again, we’re doing a lot of this work to enable this technology to be used in a real sense.”

He said one of the amazing things about holograms is that a three-dimensional object can stay fixed in space, instead of moving with the person wearing the technology.

McSporran said there was a lot of thought going into the development of this technology, not just in terms of how it can benefit industry or the public sector, but also how it can “overcome some of the challenges we face. as a community”.

He said New Brunswick has all the “ingredients” to be considered a world center of excellence in this type of technology.

“The sky really is the limit.”

Navigating the Risks and Benefits of ChatGPT | January | 2023 | Writing

Success and Me Education Program